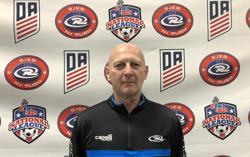 Wayne Grocott comes to SJEB as our new boys Technical Director and with great depth and international experience, with a terrific winning tradition. Wayne began playing soccer in his native England and quickly found his playing level with local semi professional clubs. During his playing career – which lasted 14 years – Wayne played soccer for Cheshunt FC, Wisbech Town FC, Hertford Town FC, St Margaretsbury FC, Waltham Abbey FC, Ware FC, Hoddesdon Town FC and Bishops Stortford FC and also trained with Brentford (currently Division 2 in the English League) and with Cambridge United FC (currently Blue Square Premier division of the Football Conference). Wayne has extensive coaching experience in the UK where he coached for the professional team Barnet FC of the English Soccer League Division 2 for their Football in the Community Scheme and also Norwich City FC of the English Championship League in their School of Excellence.

He began his WPSL coaching career in 2006 when he was named the Head Coach of the expansion Northampton Laurels. During the Laurels inaugural season, he guided the franchise to a second place finish in the Southern Division of the Eastern Conference and a berth in the WPSL playoffs. In 2007, Wayne moved over to direct the Philadelphia Liberty to a 3rd-place finish in the WPSL’s Eastern Conference – Mid-Atlantic Division. Wayne also coached the CDSA Future for two years 2008 and 2009 seasons.

Wayne has also served as the Head Coach of the Ocean City Barons team (USL/PDL) in 2005 – moving over from their women’s side, the South Jersey Banshees. Wayne directed the Banshees, in their inaugural season of 2001, to a second-place finish and berth in the conference finals. From there, Wayne moved to the Cape Cod Crusaders (USL/PDL) as a youth academy coach in their successful 2002 season before returning to the Barons/Banshees in their undefeated 2003 season.

In May 2008 Wayne became the 1st Assistant Coach for the Philadelphia Independence of the Women’s Professional Soccer League team and was responsible in player identification, youth Academy Director. Wayne Left the Philadelphia Independence in August 2009 just before their inaugural WPS season. In January 2011 Wayne was hired as the Technical Director for Mount Laurel United where he successfully transformed the training for all travel teams and the recreation players - Wayne also developed a club wide curriculum, developed a summer select program with over 12 teams and many other successful training programs in a two year spell with the club. June 2012 Wayne enjoyed a brief spell as the Assistant Women’s Coach for Philadelphia University.

Notable players that Wayne has had the privilege of coaching over the years: