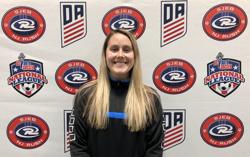 Veronica Rhea is a Staff Coach for SJEB Rush, the Head Coach for the SJEB Junior Academy, and is in her seventh season as an assistant women’s soccer coach at Rowan University.

Rhea played for the Profs from 2008-11. She ended her career as the school’s all-time assists leader with 35. Rhea also holds the University marks for assists in a game (5, September 18, 2010 vs. Montclair State University) and assists in a season (16, 2009). She is fourth with 111 career points (38 goals, 35 assists). Rhea was a three-time New Jersey Athletic Conference All-Conference first team honoree. She was named to the Eastern College Athletic Conference Metro Region All-Star first team twice. Rhea was selected to the National Soccer Coaches Association of America South Atlantic All-Region second team in 2011. She received All-Region third team honors in 2009.

Rhea was a two-time Rowan Scholar-Athlete. She graduated in 2012 with a bachelor’s degree in health and exercise science.