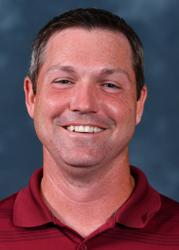 Fred is completed six seasons as an assistant with Saint Joseph's and this past season as associate head coach.

In that seven-year tenure King has helped the Hawks post an 83-42-14 record over that period, while earning six Atlantic 10 Championship berths and the 2016 A-10 Regular Season title. Along with the team's success, King has also been instrumental in player development as 16 Hawks have garnered A-10 All-Conference honors and seven named to All-Region squads.

Prior to joining Rutgers, King served as a State Development Coach for the Massachusetts Youth Soccer Association from 2008 until 2010. Serving as head coach of the U-15 Olympic Development Program team, he led his teams to the Region 1 ODP finals in 2008 and 2009 and semifinals in 2010.

King began his collegiate coaching experience at Tufts University, serving as an assistant with the men's team in 2004 and 2005. From there he would served as a volunteer assistant with Harvard's men's team for the 2007 season. While with the Crimson, King helped the team advance to its second-straight NCAA Tournament and finish with the third most goals in the nation.

Working as a coach with the F.C. Greater Boston Bolts, King began his professional coaching career in 2005. Coaching the U-12, U-16 and U-18 boys squads, he helped the Bolts win state championships in 2006 and 2007 as well as the regional finals in the same years.

A 2002 graduate of Goldsmiths College, University of London, King was a three-year letter winner and served as team captain of the First XI soccer team. While playing for the University of London Representative team, he also competed with Dulwich Hamlet Football Club.

Along with his duties with the Hawks, King is a staff coach for both the Players Development Academy and New Jersey Youth Soccer Association as well coaching on the Region 1 ODP Staff. King holds a USSF 'A' License, NSCAA Advanced National Diploma, USSF National Youth License and a KNVB National Diploma and is an instructor for New Jersey Youth Soccer Association Coaching Education Program.

King and his family currently reside in Moorestown, N.J.