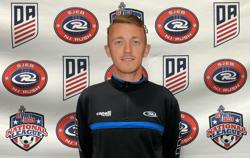 George is a native of South Coast of England, with his youth career including AFC Bournemouth, Reading FC, and senior clubs in the non-league pyramid. After injury, he began his coaching career in 2009 with a U-16 Boy’s Team.

From 2010 to 2015, George began coaching at his Alma Mater, Brockenhurst College, assisting the First-Team to three National Finals over the five year span, and as Head Coach of the Second-team. Meanwhile in 2012, he took on an additional team at New Milton FC then Christchurch FC, coaching their youth teams. In addition, for two seasons, George coached Christchurch FC U18’s, advancing the team to the first round proper of the FA Youth Cup for two years in a row, as well as the final 32 at the Gothia Cup in Sweden. Finally before coming to the United States, George began at the AFC Bournemouth Advanced Development Center, a feeder program for the club academy, gaining two years of experience.

In 2015, George brought his career to the United States, beginning with Atlantic Soccer Factory (ASF), coaching youth in local townships and senior men. After ASF, George transitioned to Global Premier Soccer (GPS) taking over one of the New Jersey Premier branches. In the fall of 2018 and spring of 2019, George won the President’s Cup in two separate age groups. Taking on an additional challenge, George entered the college game as an Assistant Coach at NCAA DII Goldey-Beacom College in 2019, where the team to progressed to the CACC Semi-Final.

George currently holds English FA Level 1 and Level 2 qualifications, FA Youth Module 1 and 2 as well as an education background in Health and Fitness.