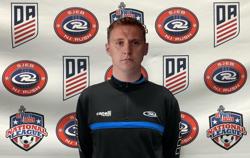 David Hughes is joining the SJEB Rush coaching staff in the Fall of 2020, taking up the position of the U8-U12 Director of Coaching.

A native of Glasgow, Scotland, David graduated with honors from Lancaster University and earned a Bachelor of Science in Coaching and Sport Performance. Coach Hughes also has a strong playing and coaching background in soccer, having played with Carlisle United Football Club and Workington AFC.

Coach Hughes also gained a high quality coaching experience after returning to Carlisle United as a Youth Academy coach. He served as an assistant on the Philadelphia Fury men's professional soccer team as an assistant coach and is currently the Head Coach of the Men's Soccer program at RCBC.